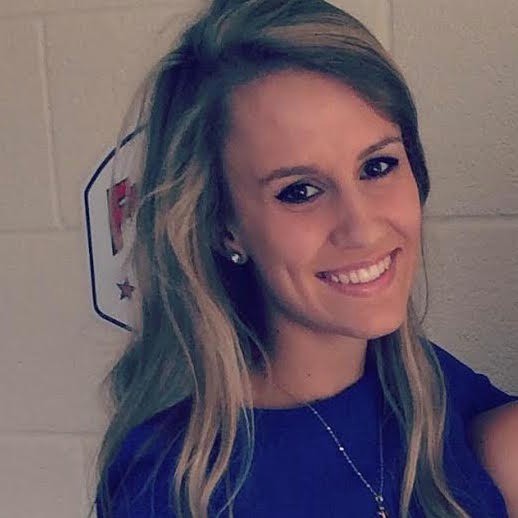 My name is Emelie Savard and I am currently a first year student in the new Sport Media program, part of RTA at Ryerson University. This is the first year this program is being run and it is also the first one of its kind in North America! How cool is that?! This program teaches students the world of media…from a sport perspective. We get to work behind and in front of the camera, with audio, social media etc.. and we are also exposed to the business side of sport as well.

Although I do not play any sports for the Ryerson Rams, does not mean I don’t know anything about them! Seeing as I go to almost every sports teams games at Ryerson, I think that it is crucial for students to come out and support their men’s basketball team on their road to the Final 8. Not only do you get to watch some amazing basketball being played but you get to support your school and what can compete with that?!

Showing school spirit is a huge part of university sports and really shows that students love their school and ultimately love their athletics. This championship is very important for not only the athletes and coaches but Ryerson as a whole as well. Wouldn’t it be cool to know you were there to be a part of the action? Not only that, but the CIS Men’s basketball is being held right here at Ryerson in our own Mattamy Athletic Centre. Not to mention that the Mattamy Athletic Centre used to be the old Maple Leaf Gardens, home to some of the most historical sports games of all time. Why not help us make our own history? Come out and support your Ryerson Rams Men’s Basketball team on their road to the Final 8.

We are all Rams.

What’s the first thing that comes to mind when you think about basketball? Ha..I bet you never thought of snow angels…

For sports broadcasters, the main content we focus on comes from the players and coaches but we do not truly realize exactly how much fans have an affect on their team. The excitement in the crowd after Friday’s game was booming with so many fans, young and old. The best part was that not all of these fans even go to Ryerson U. I was sitting beside two young boys, not over the age of 12, who knew every single Rams player and would cheer them on as they went out to play. They even knew the coach, Roy Rana, and would yell “Good Coaching Rana” every time there was a timeout.This past Friday the Ryerson Rams Men’s Basketball team defeated Queens 94-67. However, although the game was a blow-out, the two elements that stood out to me the most was the amount of unreal slam dunks coming from these Ryerson players and their fans’ reactions. Yes, the fans were jumping up and down with excitement but how about laying on the gymnasium floor and making… snow angels? An interesting and different display of pride but entertaining all in the same.

So obviously watching the Rams slam dunk more than once on the Queens Gaels was more than enough to get these fans hyped. This goes to show how much fans make their sports teams all that they are. Fans look up to these players and coaches, and are really the ones who make the game. Yes, focusing on getting the best interview and the best shot is crucial in the world of sports broadcasting but sometimes we need to take a step back and notice the parts of athletics that not everyone would see to be as important.

Heading into the playoffs ranked third in the country, claiming their 17th win last week, it’s obvious that this Ryerson Ram’s Mens Basketball team has more talent, heart and loyalty through their fan base than anyone else. And that is pretty amazing.

It might have seemed like just another regular season game for the Ryerson Rams Saturday night against the Laurier Golden Hawks, except for the fact that it happened to be the quarter finals and the Rams were able to put the game away winning 105-59, casually.

The Rams started out the game on an okay note, missing many free throws, but clearly were able to overcome their troubles at the line and take home the win. The Rams now advance into the Wilson Cup Final Four this weekend against the Carleton Ravens, who have won all but two national championships since 2002.

Carleton is number one in the CIS ranks while Ryerson is sitting at number three. Naturally this should be a challenging game for the Rams. However, the Rams have a way of starting off a bit slow and then picking up speed once the end of the first quarter rolls around. They pour it on once they get their score up high enough to feel somewhat comfortable and start dunking on teams, showing what they can really do.

Last night (Saturday) Adam Voll and JV Mukama slammed Ryerson’s two dunks in the fourth quarter, further setting the tone for this Ryerson basketball team heading into the Final Four and ultimately the CIS Championship. Even though this weekend’s game against Carleton plays no factor in the Rams going to the CIS Final 8, it sure would be nice to keep showing universities again and again that the Ryerson Rams are a force to be reckoned with.

Here we are. Just days before the CIS Final 8 Championship. The Ryerson Rams Men’s Basketball team are third in the country and are heading into the Championship with a 17 and 2 record. However, this past weekend the Rams lost in the semi finals to the Carelton Ravens…and then lost in the bronze metal game against the Ottawa Gee Gee’s.  After watching both of these losses unfold many might be thinking, what happens now?

Well since the Ryerson Rams will be hosting the CIS Final 8 Championship at Ryerson’s Mattamy Athletic Centre, this means they will automatically get to play in the Championship. Now, you might be thinking, well what do these games matter if the Rams have already lost to both Carleton and Ottawa?

A second chance to work hard in practice all week, polish off their skills, shoot around, mentally prepare and just be with each other. Great teams are not defined only by their physical ability, they are defined by friendship.  Every team wants to be the best but it’s the teams with the most heart that come out on top. Since the Rams will get to play in the Championship, this means that the Rams have a second shot at beating both Carleton AND Ottawa. Everyone loves a little redemption.

The Rams Network along with the rest of Ryerson are busy peppering for the CIS Championship, gathering volunteers and making sure everyone is excited for this special event to come to Toronto. The Rams only lost to Carelton by four points. Four points. Although it will be a tough battle for the Rams to beat both teams in the CIS Championship this upcoming weekend, it is not impossible. Ryerson still has a chance to win Nationals and show once and for all that they are the best team in Canada.

The road is far from over.