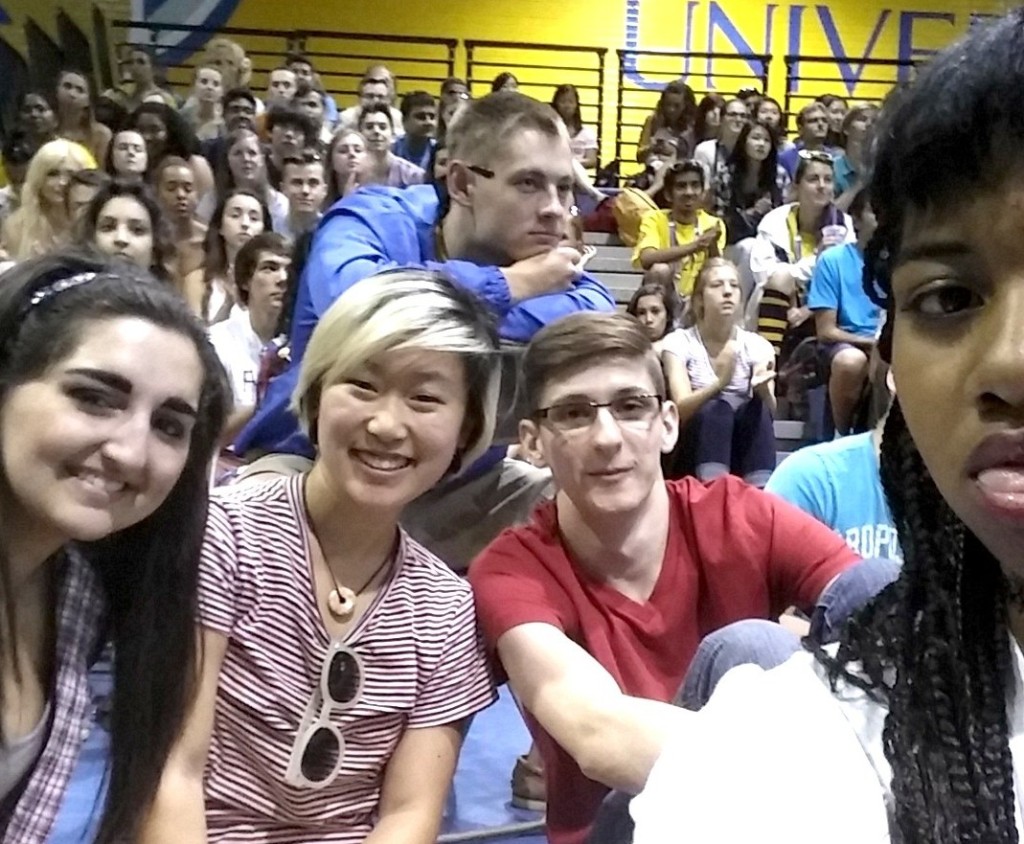 Nolan Blanchard was in our first ever group of #RoadToRyerson bloggers 4 years ago. We followed his journey leading up to Ryerson, through Ryerson, and now that he’s (pretty far from) his #RoadFROMRyerson, he is sharing what he has learned along the way. To see his old blogs and video, click here.

A chance meeting online. Travelling across the continent. Adopting a kitten. A failed immigration visa. Returning to reality and what that means to a young 20 something-year old.

When I first wrote in for #RoadToRyerson, I don’t think I, nor anyone else following along, knew how life might play out for myself or any of my fellow #RoadToRyerson colleagues. Or maybe they did and they have amazing observational skills bordering on fortune-telling. Regardless, I was asked to write once again as a followup to address my road FROM Ryerson – one that may have been longer than my peers since I departed from the school only shortly after enrolling in 2014. When I last wrote, I was filled with hope and ambition as I had recentered my goals for my education and my dream to return to Toronto. Fortunately, life doesn’t always go as planned. What ended up transpiring shortly after embarking on my second post-secondary adventure marked the beginning of what would become some of the darkest moments of my life. But the reason I say that it was fortunate is that I am safe, healthy, and am blessed to have been able to stare into that darkness and come out wiser.

Something I want to make clear is that everyone’s journey is unique and challenging in its own way. My story is not for everyone. My story is for those that may be like me – extremely self-critical, perfectionistic, idealistic. Someone who may feel trapped or alone who wants to feel connected to someone or something. Someone who is terrified that the idea of personal growth is just a fantasy as far from reality as unicorns may be. These are my struggles. These are just some of the barriers that I’ve been trying to overcome since 2014, that I’ll continue to struggle with and that I think are rooted in unhealthy preconceptions of what it means to be young, what it means to be successful, and what it means to be happy.

After realizing I had made another wrong choice of schooling again, I began to view myself as a failure through and through. I casually joked about it and wore my “two-time dropout” title as an ironic banner of pride. It took me a long time – years actually – to come to terms with my path in life and how it may differ from what I wanted and expected from myself. Shortly after leaving Toronto and returned to Windsor once again, two things happened that would change my life in ways I never expected. One would renew my confidence in myself and one would shatter my perception of love, trust, mental wellness, and intimacy.

The first thing that happened was a chance encounter with a stranger online on December 4th, 2015. We bonded over a shared taste in music and quickly began to talk over Skype constantly, quite literally. Things escalated very quickly and this stranger ended up travelling from Washington state where she resided and spending 4 months in my hometown. We entered what would be a year and a half long relationship. I thought I had found my soulmate. All things pointed to that being true. We had amazing compatibility – we shared similar views on politics, education, art, and what we wanted from life. We talked for hours without it ever being dull. She was perhaps the most intelligent person I’ve ever met. She was getting a PhD in Pure Math yet she was well-versed in many other subjects. There were but a few problems here that I ignored in my love-sick state. Between us was an age gap of 6 years, 3,800km, and an international border. Oh ya… She was also married.

Now, I am not going to sit here and repeat verbatim every excuse I made for pursuing the relationship despite all the red-flags. I will make note however that her marriage was unconventional and consensually non-monogamous. Only very recently, almost a year after our breakup, have I accepted that we should never have been together in the first place – where before I lamented how it was just circumstance that separated us. The deck WAS stacked against us but perhaps that should have been a sign to re-evaluate rather than push on.

To return to my journey, I will say that the first half our relationship seemed quite happy. The highlight was a trip I had made to Walla Walla, Washington (Yes, that IS a real place, albeit in the middle of nowhere) with her to adopt a kitten whom we named Lucy. This was the first pet I played an active role in adopting, taking care of, and considering my “own” and it is probably the purest thing to come out of my haphazard relationship. But shortly after adopting Lucy, things started to go south. Very south. Determined to make our relationship work and with feverish impatience, we came to the decision to migrate me to the USA – which resulted in her subsequent divorce and our attempts to complete an immigration visa. I moved in with her for 3 months on a visitation visa while we worked out the details but instead I spent 3 months witnessing the darkest decline into despair and mental health failure I could have imagined.

I won’t go into too many personal details but I can say that due to a great many factors, despite my attempts to seek help, and perhaps because of them, my partner became severely unstable and I endured 6 months of emotional and psychological abuse. Eventually, after becoming a hollow shell of myself and expending all my financial, emotional, and physical resources I sought help from family and admitted everything that had been going on behind closed doors. I then spent another month trying to cut ties once and for all. The half-year span between Fall 2016 and Spring 2017 was the darkest I’ve ever experienced in my life, far eclipsing my own personal depression following my second dropout.

Earlier I mentioned that there were two life-changing events that happened at the end of 2015. My relationship was one of them, the other was quite simple. I got a job as Tim Hortons.

Funnily enough, when applying for jobs, I actively avoided applying for Tim Hortons because I thought it would be too much for me to handle – it always seemed too chaotic for me. I thought I needed something more relaxed. My step-mom helped me secure this job despite my general unhappiness at the prospect. After 2 weeks I was ready to quit. I was overwhelmed completely, but I am so happy I stuck with it. Despite me terribly sucking at pretty much everything for 6 months, I integrated into a diverse group of hard working people who supported each other. After being diagnosed with ADHD and finally getting the medications I needed, my confidence at my job soared and I was promoted twice in the year that followed.

If there is one red-flag in a relationship that absolutely needs to be heeded, I would say it is being denied or discouraged from doing something that you love and that makes you truly happy. My partner urged me to leave my job and close the distance between us despite my repeated emphasis on how important it was to me.

My job has provided me so many things that can’t be understated. I have a boss who is both a leader and a mentor. I have coworkers who I’m proud I can call my friends, who have supported me through everything I’ve endured and who I appreciate so much. I have an endless amount of obstacles with which to challenge myself and from which I grow every day. I’m constantly learning. I’m inspired by every person I work with as they overcome their own obstacles and grow before my eyes. To be a part of that is extremely important to me.

To put it in context, note that my biggest fear is one of stagnancy. I deeply value growth and one of my greatest passions is education. However, beginning somewhere in the middle of high school I hit a wall. I was plagued by a fear of failure, my own vanity, and my perception of success that prevented me from taking the steps to better myself that I actually required. My job has afforded me the feeling the I can and will grow once more. That I can become a better person. A huge part of that that I never expected is that I needed to accept myself as I am. I ran into an education I didn’t want. I ran into a relationship I shouldn’t have been in. I ran away from responsibility. And to actually move forward, I needed to stop running.

I vividly remember a conversation I had with my mother after my breakup sometime in early 2017 about what it means to be a 20-something year old. It’s a conversation that began to change those ill-conceived ideas I had created. She challenged me by giving me some much needed perspective about life. People are not defined by their success, their aptitude, their contributions to the economy – those are all potentially great things, but everyone has their own story. It’s not always happy and it’s not always easy and it’s never simple. People, especially young people in their 20s, don’t always have the answers they seek and often aren’t even asking the right questions. Some people are just trying to hang on to something. My mother was 21 when they had my brother; my father was 19. No one walks the same path and no one knows where their path will lead.

Where am I now? I’m still accepting this lesson. I’m still teaching myself what self-care means. I’m still living at home looking at post-secondary as my next step. But I have completely redefined what I require to prosper along the way and what prosperity means. I can say that I am the happiest and most confident I’ve been in over 6 years or more. I am no longer deterred by the idea that someone else my age is achieving more or knows more or has more. I am planning on moving away for school for the third time but not because I feel like I need this education to be happy. I am being honest when I say that I have no qualms about waiting until I am 30 years+ before I get the education I desire. I am not in a rush. And it is the most liberating feeling in the world.

RU Student Life
By students, for students: RU Student Life is dedicated to sharing stories of what it's really like to be a Ryerson student. We strive to make everything inspiring, informational, amusing, useful, and critical, and we believe every one of us has a story worth sharing. Visit studentlife.ryerson.ca/about to find out more.