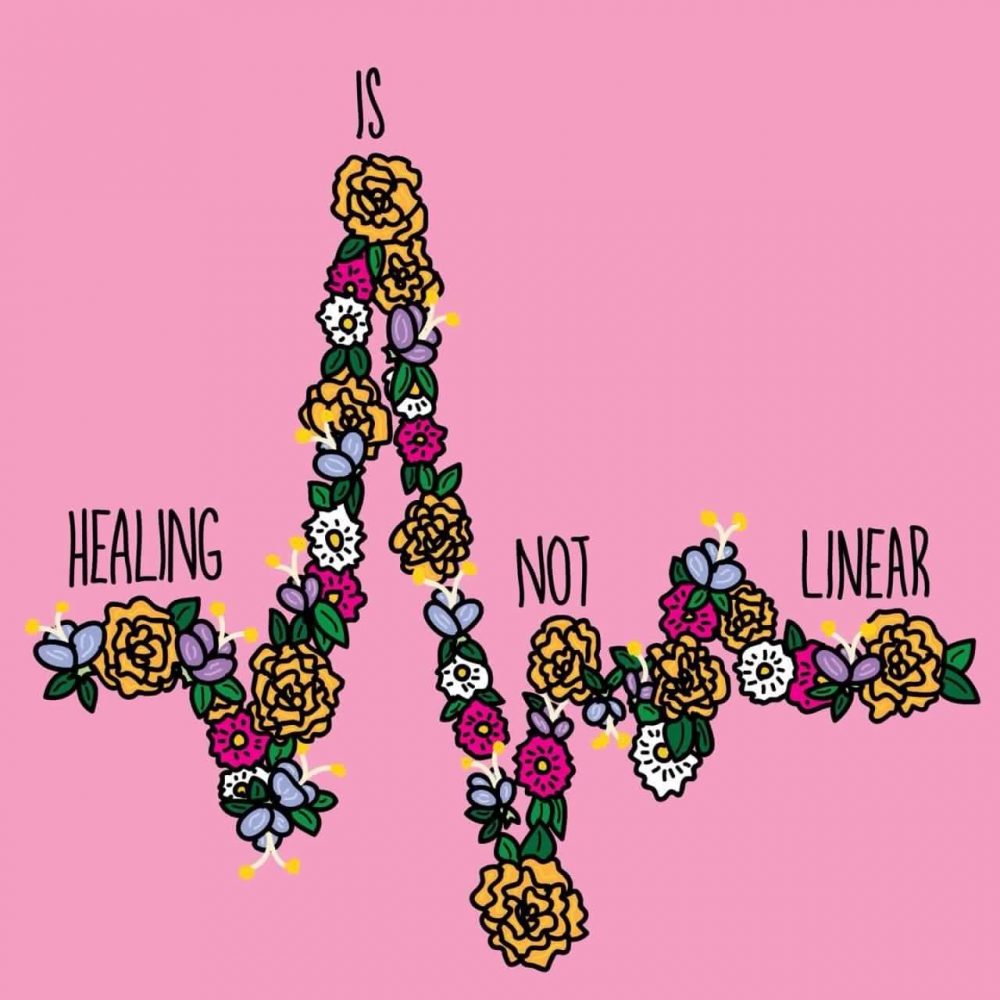 Throughout the fall, illustrator Frizz Kid will be working with the Ryerson community to create a ‘Zine about consent, healing and resistance to sexual violence on campus. She will be leading free art making workshops on campus, the first one is taking place Wednesday September 21st at the Ryerson Student Campus Centre from 12-2 p.m. in the Layton Room (55 Gould St). The zine will be launched as a part of the Sexual Assault RoadShow, a pop-up participatory art gallery that will be on Gould Street during Social Justice week (October 31 – November 5th).

ARTIST BIO: Hana Shafi a.k.a Frizz Kid is a freelance journalist and illustrator based out of Toronto. Her art focuses around themes of feminism, bodily autonomy, mental health, and healing from trauma. She spends her time ranting online, doodling, and re-watching Lord of The Rings.

I sat down with Frizz Kid to learn more.

You graduated from Ryerson’s School of Journalism; as a student, did you address the topic of sexual violence throughout your studies?

That was definitely something that was really important to me when I was a student, and as a freelance journalist now, it’s just as important. I’ve always put an emphasis on writing pieces that talk openly and honestly about misogyny and sexual violence. I think the journalism industry has a long way to go when it comes to reporting on sexual violence. There are still so many myths perpetuated by the media, so I try my best to challenge those myths in my own writing. 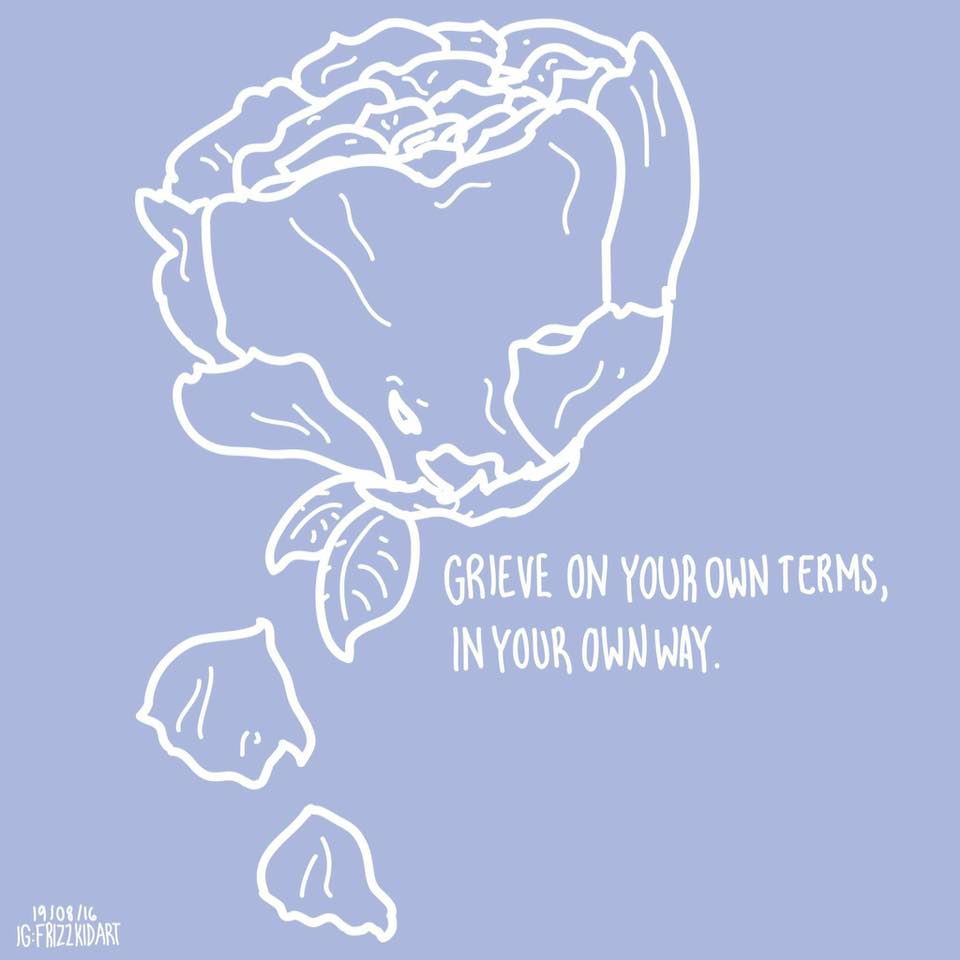 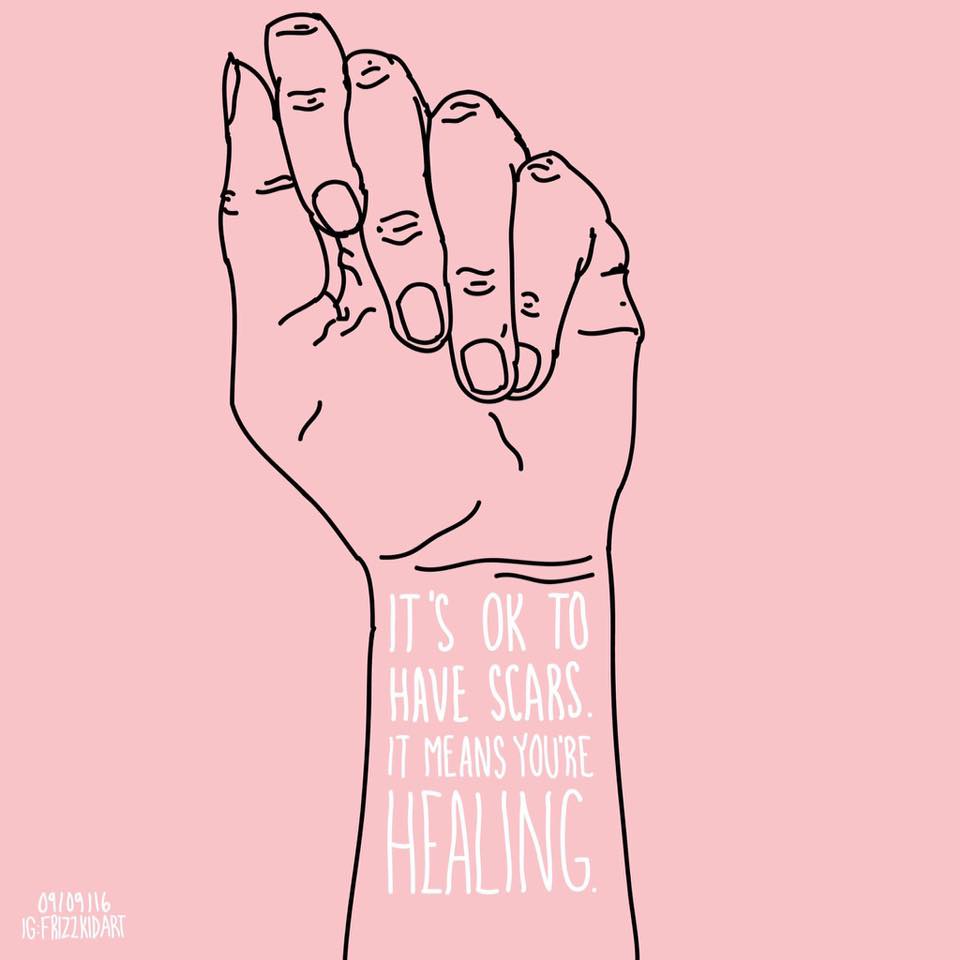 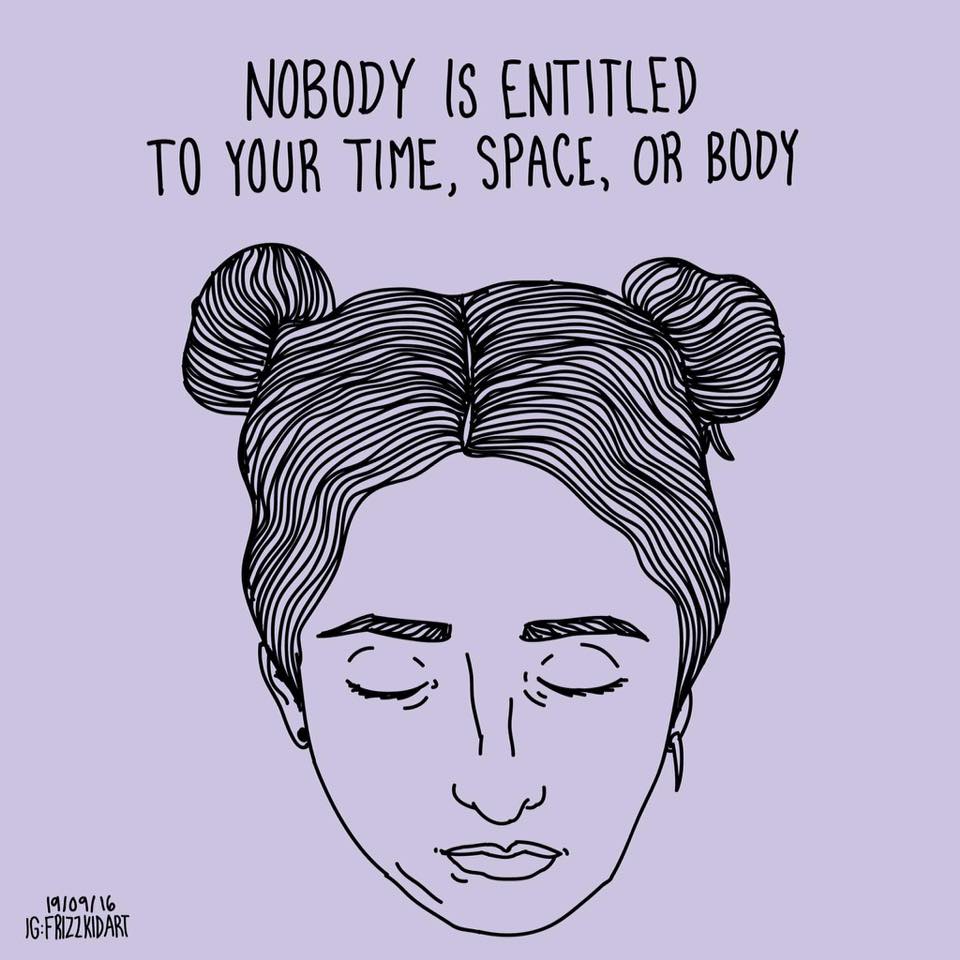 I was always into art growing up, but when I was in University I started putting a lot more time into drawing. I pushed myself to draw every day. It was an outlet for me. I realized I could create something regardless of my lack of art training. I think I was pretty insecure about a lot of my work when I started drawing. My style, with the exception of the affirmation series, has always been very odd, disproportionate, kinda weird. I was afraid people would just think it was bad, unskilled art. But the more I drew, the more confidence I gained. I learned to love myself as an artist.

What inspired you to start the Positive Affirmations series?

Initially, I made a few digital illustrations inspired by the #WeBelieveSurvivors trending hashtag, which was a response to the Ghomeshi trial. People’s reactions to the drawings were so honest, and compassionate, I was inspired to make more. It was a huge step away from my usual style, so it was a challenge. But making art that made such a positive impact on people was just so deeply fulfilling for me.

Are there any myths you want to challenge about sexual violence on university campuses?

What do you think needs to be discussed when exploring topics like consent and healing from sexual violence?

We need to normalize talking about consent and having really frank discussions about sex, and I think this is slowly happening. I think for a lot people, getting asked, “how do you ask for sex?” is such a confusing question. Let’s have open discussions about consent. And in terms of healing, I really think we need to explore the power of vulnerability. Vulnerability can be a form of resistance. That can mean expressing your pain, your sensitivity, your frustration or sadness. It’s not only healing but it’s a “screw you” to oppressive institutions and dynamics that encourage us to be silent or feel ashamed.

What excites you about being part of Sexual Assault: The Roadshow?

I think the work behind the Sexual Assault Roadshow is so valuable, and I’m especially excited about being apart of it at Ryerson, since that’s where I went to school for four years. I’m still going to school here, actually; I’m taking Chang school courses. I’m excited to help make change in a space that I’ve occupied for so many years, and a space that really needs it. University campuses can be scary places for a lot of people. And I hope that these workshops will provide a safe space for those who need it. 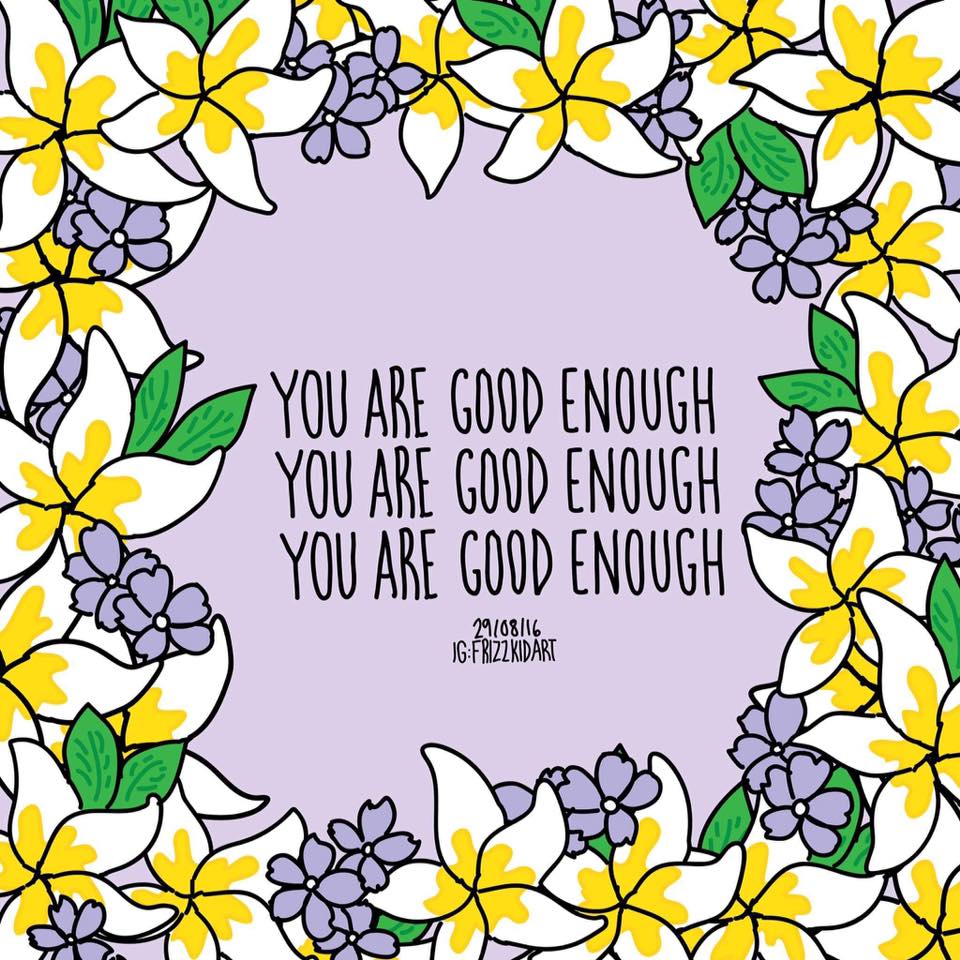 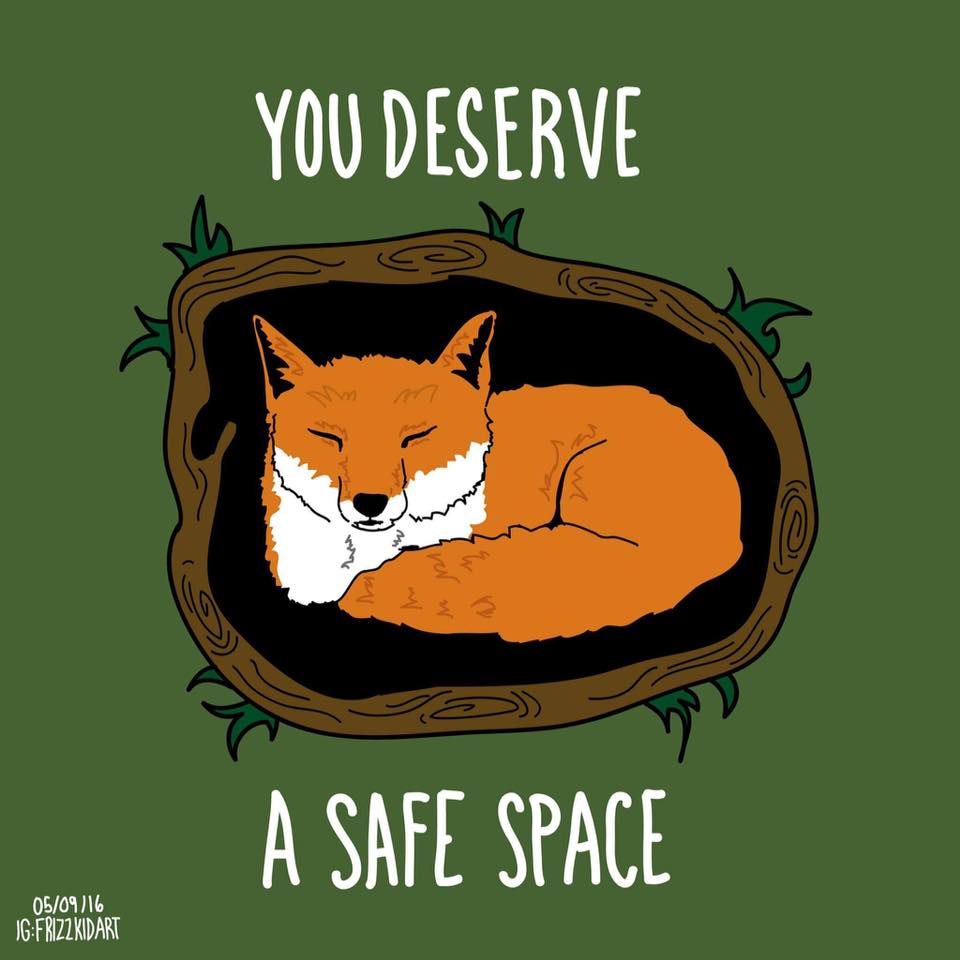 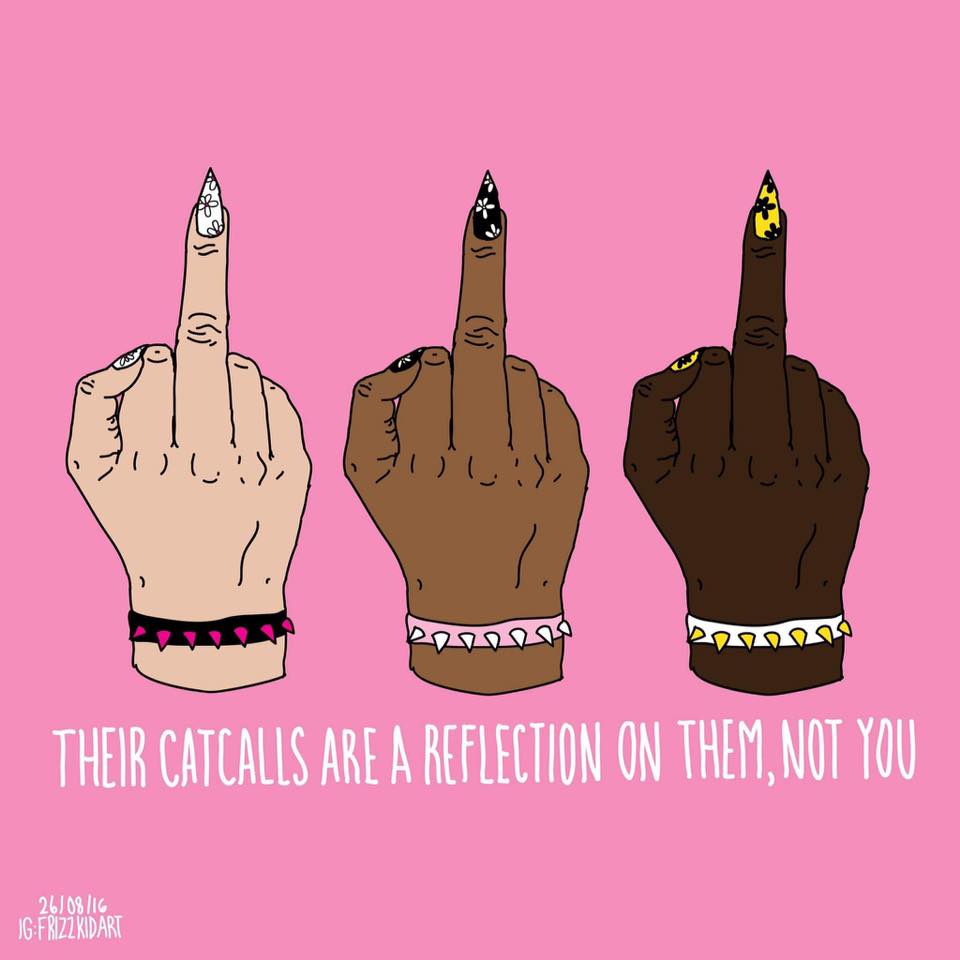 If someone wants to know more about your work, where can they go?

You can check out more of my stuff on my Instagram. The handle is @frizzkidart. I also have a Facebook page, Frizz Kid. I’m on Tumblr, and you can find me on Twitter too. But Instagram is where I’m most active in terms of art stuff.

Any future projects you are working on that you would want to share?

I recently started a humorous little series called anti-affirmations. I’ve fallen behind a little on making those, but I hope to keep them going. They’re drawings that depict those days where we really just don’t have the energy to be positive and they’re meant to be really funny and relatable. I’m also hoping to create some really large canvas pieces of my hyper-detailed pen pieces. That’s something I’ve really had my heart set on for a while now.

MORE INFORMATION ABOUT THE RYERSON EVENT

The Office of Sexual Violence Support and Education is hosting a series of FREE art making workshops for the Ryerson Community. The zine will be launched as a part of the Sexual Assault RoadShow, a pop-up participatory art gallery that will be on Gould Street during Social Justice week.

The workshops are a collaboration between: The Office of Sexual Violence Support and Education, Centre for Women and Trans People, Ryerson Student Union, The Office of Equity, Diversity and Inclusion and the Sexual Assault Roadshow.

Sexual Assault: The Roadshow is a pop-up participatory art gallery in a shipping container. The retrofitted, glass fronted container will travel on a flatbed truck to 15 cities/areas in Ontario over a three year period. At each stop, local artists will work with anti-violence experts and community participants to create, curate and exhibit art that “talks back” to sexual assault. Recently, there has been unprecedented dialogue and awareness about the crime and sexual violence generally. Sexual Assault: The Roadshow will serve as work and exhibition space for multiple art forms that will further that dialogue in creative, community based and transformative ways. We are a project by sexual assault activist Jane Doe and artist/activist Lillian Allen. It is funded by the Ontario Arts Council and sponsored by VTape | The source for video and new media.

Want to submit to our collaborative ‘zine on healing? You can email your short stories, comics, drawing, pictures and illustrations to osvse@ryerson.ca. Submission date: October 15th 2016.

About the author: My name is Amanda Costa I am a fourth year BSW student from Ryerson University. I am currently completing my 2016/2017 placement at the Office of Sexual Violence Support and Education. I am passionate about ending all forms of gendered based violence, especially at school. Throughout the year, I hope to help make Ryerson a safer, more accessible, and welcoming space. 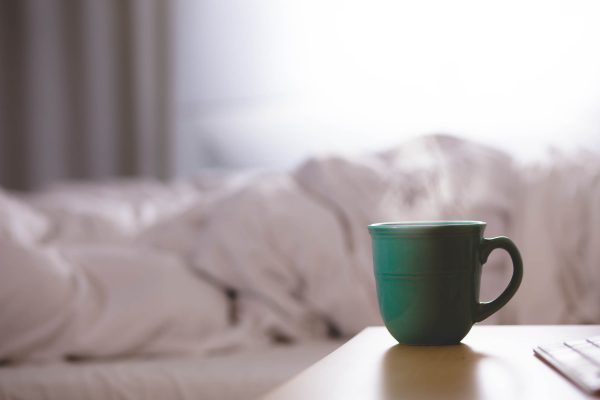 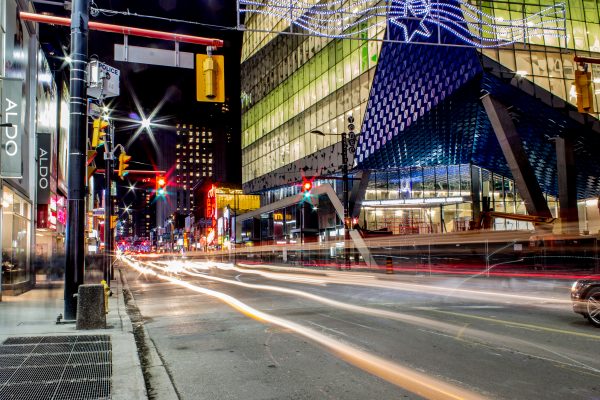 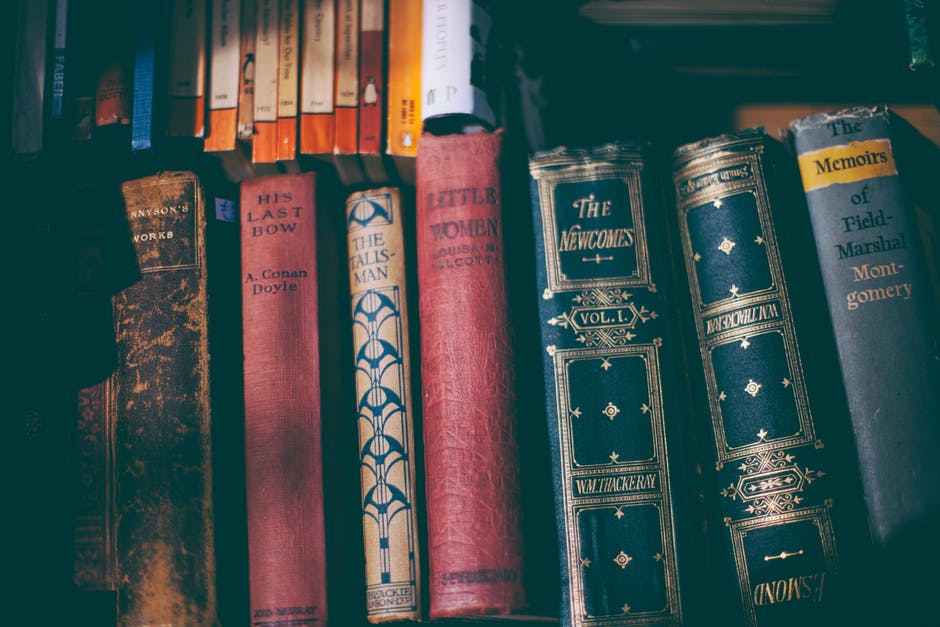 Words from the Wise: 11 Poets You Need to Check Out

Why you should vote in the Senate Elections 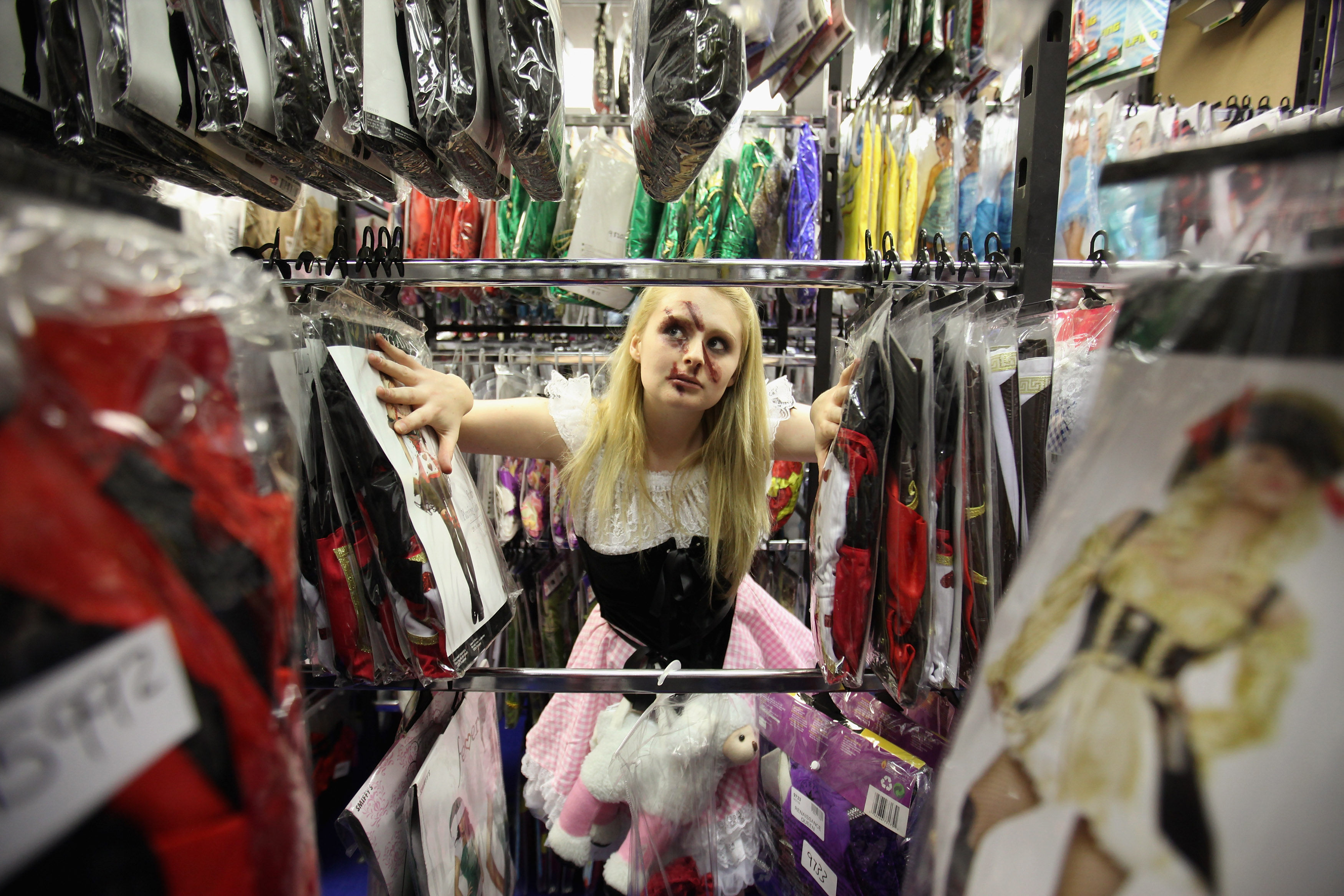 Is Your Halloween Costume Offensive?